This “Colorado Treasure” has its share of very talented local artists. Sterling is known as the City of Living Trees for its collection of cottonwoods that have been carved into fanciful creatures and inspiring characters by artist Bradford Rhea.

Some of the sculptures have now been restored and cast in bronze and several have been moved inside. Twelve of Rhea’s 17 tree sculptures located within close proximity to one another can be viewed during a self-directed tour. Pamphlets are available at the Tourist Information Center at the Sterling Rest Area, or print one here. Click HERE for map. In order to see all of the sculptures listed in the pamphlet, the best time to take your tour is sometime Monday through Friday between 8 a.m. and 5 p.m. when all facilities are open and available.

Nine of the tree sculptures (some of which have been replicated in bronze) are available for viewing via a self-directed tour, starting with “Metamorphosis” at the Sterling Visitors Center.

While people all over the world now own Rhea’s work, he began his sculpting career here on the Colorado high plains in the 1980s when he gave life to dying tree trunks throughout the community. All around town are cottonwoods that he has carved into fanciful creatures and heavenly angels.

In 1993, Rhea was commissioned by the United States Department of State to create a walking stick for then-President Bill Clinton to present to Pope John Paul II upon his visit to the U.S. that year. In seven days, Rhea created a staff carved from the roots of a honey locust tree.

The artist lives and continues to create masterpieces from his studio in nearby Merino.

In addition to trees, he also carves his inspirations into huge blocks of marble, including a 30,000 lb. block of Colorado Yule marble. He also transforms bronze into works of art. One of his early carvings, called Metamorphosis, greets visitors to the Tourist Information Center just east of Sterling.

Ticks and tocks of magic clocks, Hands whirling as they run; Meshing gears rewind the years, Erasing all that's done. Night and day he churns away, With passion he redeems; Deflated lives his throne revives. Machining all new dreams. 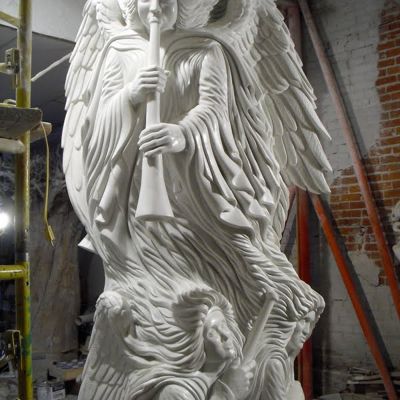 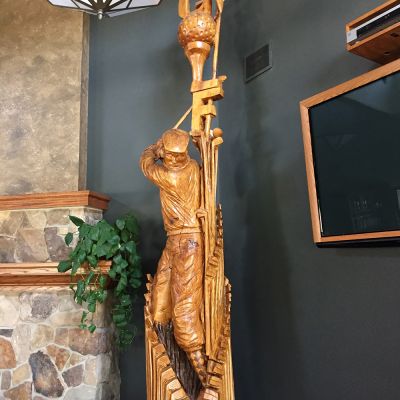 Cracking drives and Eagle dreams, On crisp and sunny dawns; Fairways stretch toward distant greens, Twixt trees o'er emerald lawns; Woods and irons and lofty chips, That land next to the pin: Give those who've ever held club's grips, The lur ...
More information... 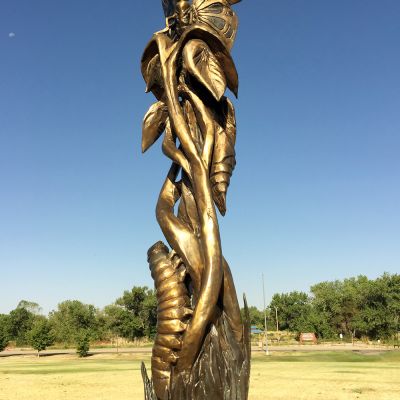 The shape of the original tree suggested the form of spreading wings which inspired Rhea to sculpt the tree trunk into his beautiful version of a caterpillar spinning a cocoon which bursts into a butterfly ready to take flight. This piece is frequently re ...
More information... 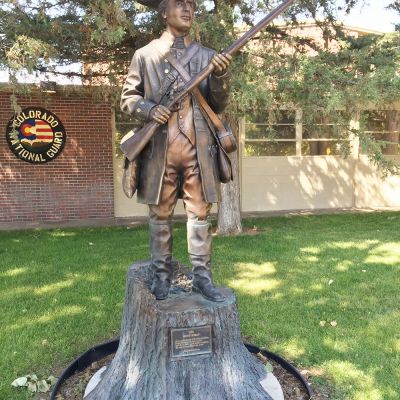 This sculpture depicts a revolutionary-era colonial guardsman in authentic dress and in proper stance to protect his nation. Among the forests of dreams and men, Some trees of freedom stand; and from their roots soldiers emerge, To march throughout ...
More information... 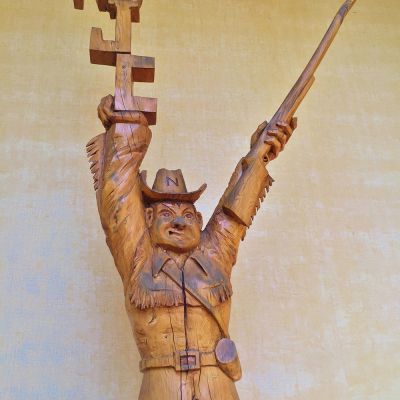 This carving serves as a "mascot" for the two-year community college. Commissioned by the NJC's 45th year as an outstanding education institution. It was originally located outside on campus but was moved inside in the 1990s to assure that it did not beco ...
More information... 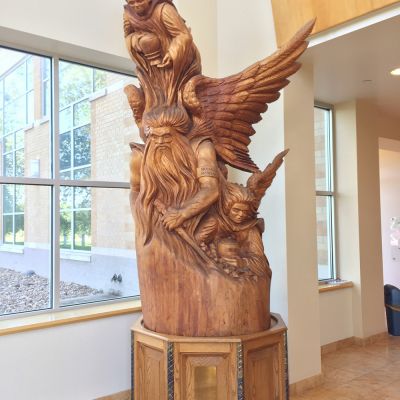 This sculpture consists of several bold, dauntless figures representing the incredible tenacity of those surviving life on the Plains. All of the figures are partially united in common support to symbolize the necessity for a cohesive element within the c ...
More information... 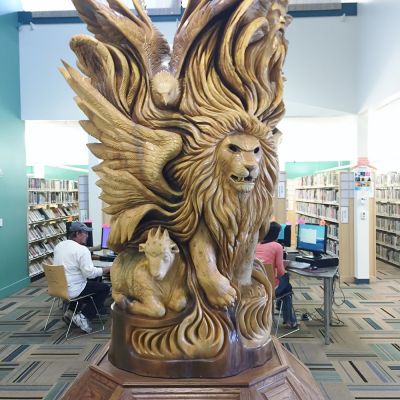 This cottonwood sculpture was inspired by a verse from the Bible which, when explored further, tells about four living creatures covered with eyes front and back - a lion, an ox, a man, and an eagle in flight. Each has six wings and eyes all over, inside ...
More information... 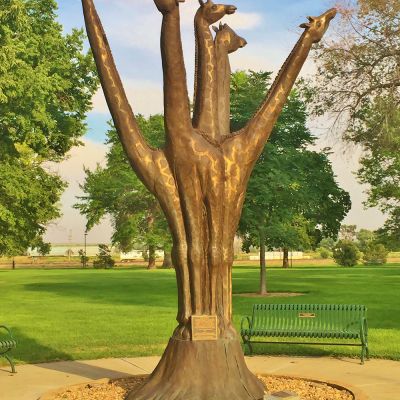 This delightful carving has become the symbol of the "City of the Living Trees" It was dedicated to the city in the fall of 1984. Just beyond the clouds of doubt and chaos they appeared; a congregation of spindling appendages fused in a mass of true be ...
More information... 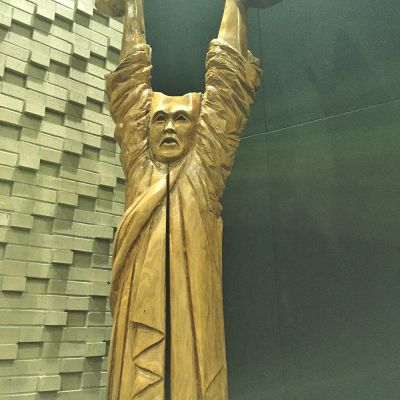 This piece exemplifies the traditional theme of comedy & tragedy. It originally was located at the entrance of the old Oak Street Theater, which was home to the Prairie Players, a local theater troupe. It took approximately 200 hours to complete. The crac ...
More information... 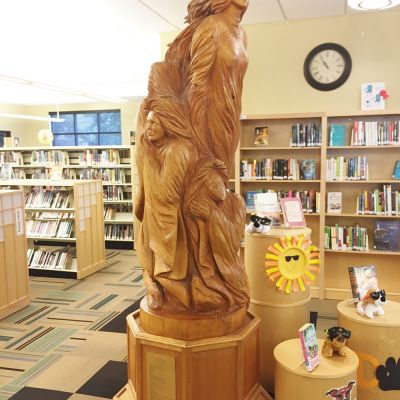 The sculpture symbolizes the courage, grace and evolution of women in our society. It was dedicated to the City of Sterling in the spring of 1987. Against a swriling breeze, imprisoned souls ascend; Rising from their knees, In a vision they transcend. ...
More information...