Enjoy this series of virtual field trips, highlighting some of the gems of Sterling and Logan County. We are looking forward to your next visit when it is once again safe to get out and travel! 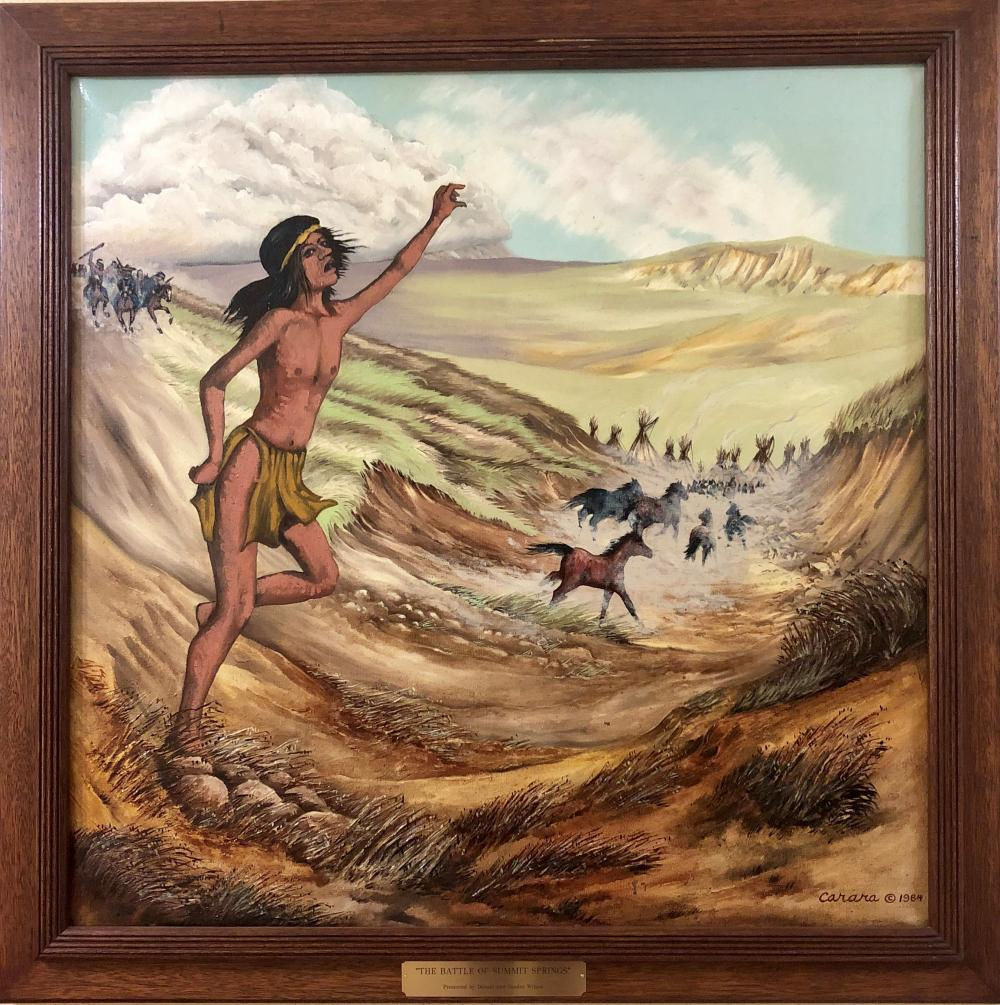 “The Battle of Summit Springs”

This painting depicts how one can sacrifice his life to save others. During a storm-threatened afternoon, this young.... lad stampeded this herd of horses into Chief Tall Bull’s camp in order to warn them of the attacking Pawnee scouts. The young boy was killed, along with many other Cheyenne that day, but because of his heroics, many survived. It is difficult to imagine what went through his mind before making his decision to stampede the herd, but one thing is clear, it was a split-second decision from one so young. Life is so precious, especially young life.

On a hot July afternoon in 1869, life on the Colorado plains came to an end for the Indians. Tall Bull, chief of the Dog Soldiers, protectors of the Cheyenne tribe, led several bands of his people, plus Arapahoe and Sioux friends, to camp at Summit Springs. He did not dream that General E.A. Carr and his 5th Calvary were close behind.

General Carr was no Chivington. Afterwards, he wrote, “We have...no pleasure in killing.” But Tall Bull had given him no choice. A few weeks earlier, his force had attacked several communities in western Kansas, killing people and taking captive Susanna Alderdice and Maria Weichel, both pregnant. They had killed three of Susanna’s children and left another for dead. Before July 11 would end, Susanna would also die.

The army was assisted by the Cheyennes’ old enemy, the Pawnees, who thundered across the prairie after women and children, killing many. Others escaped only because the Pawnees took time to scalp and mutilate every victim.

Sand Creek and Summit Springs bore dramatic similarities and contracts. At Sand Creek, an old man folded his arms and bravely awaited death. At Summit Springs, a young boy gave his life to try to save his people. Neither death succeeded except as a source of pride for the Cheyennes.

Sand Creek had launched the war on the South Platte. Summit Sprints brought the end of the Indian life on the Colorado prairie.