Western Art from the Great Plains - On Exhibit Through March 31 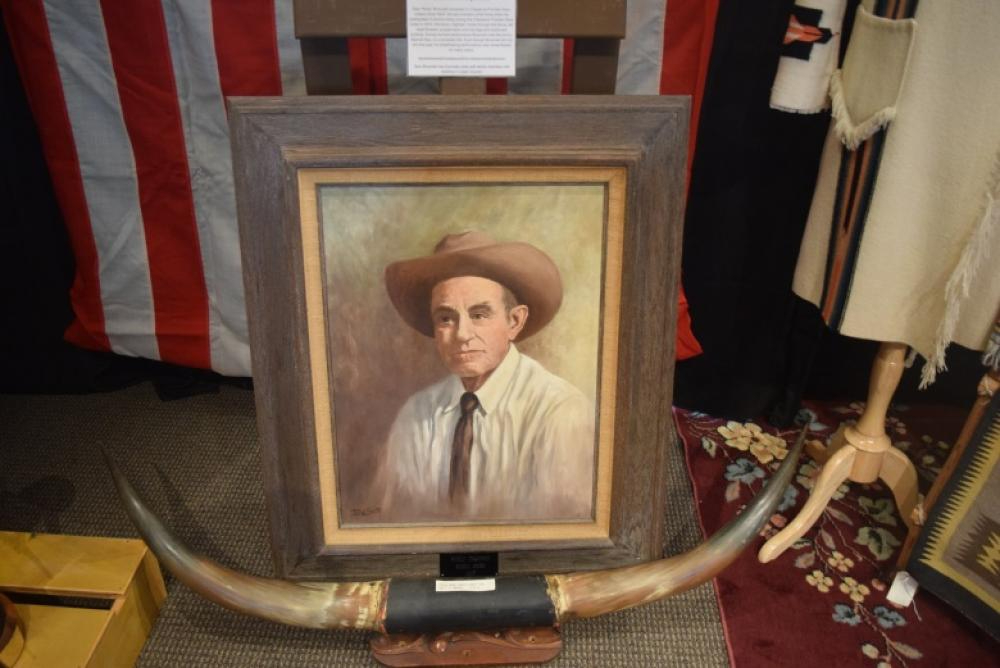 A Native American hide painting, a portrait of a world champion rodeo rider and bronze sculptures depicting pioneer life are just a few of the pieces that can be found in Overland Trail Museum’s newest exhibit, “Western Art from the Great Plains,” in the Dave Hamil Rotunda.

Several items in the exhibit have never been seen before at the museum, a few have rarely been seen and a few are always out on permanent display but are now being more prominently displayed.

Artwork in the exhibit includes a painting by an unknown artist that hung in the W.C. Harris Grain and Cattle Company and was also on the company’s letterhead, depicting a family traveling by covered wagon, looking out over an image of what will become farmland on the prairie. At the bottom of the painting, it reads, “They dreamed dreams and had visions, and they came true.”

W.C. Harris was one of the first three graduates of Sterling’s Logan County High School in 1890. 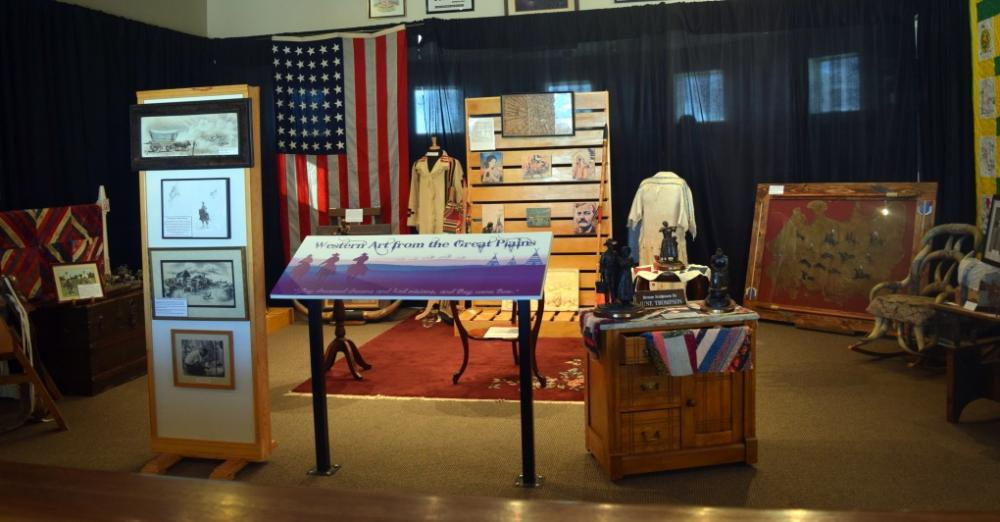 Also part of the exhibit is a painting of the Yuma Sale Barn in 1939 by Russell Sherman, who was a world-renowned artist from Sterling. A painter, photographer and illustrator, he was probably best known for his WPA posters during the Great Depression. He studied art at the Kansas City Art Institute and at the Art Students League in New York City. His variety of subjects and styles reflect not only a long span of years, but also Sherman’s statement that “I paint what I feel like, often from imagination, instead of reality.”

Above that painting is a drawing of Clifford Sherwin by local artist Kay Hendricks, who was born in Sterling and graduated from Merino High School. He won his first National Art competition at the age of 16, with a painting that portrayed a member of the Cheyenne tribe from a “misty past” observing the industrial and agricultural development of the plains. After serving in World War II, Hendricks became a saddle maker and is quoted as saying “I make saddles for my supper and I paint for my soul.” 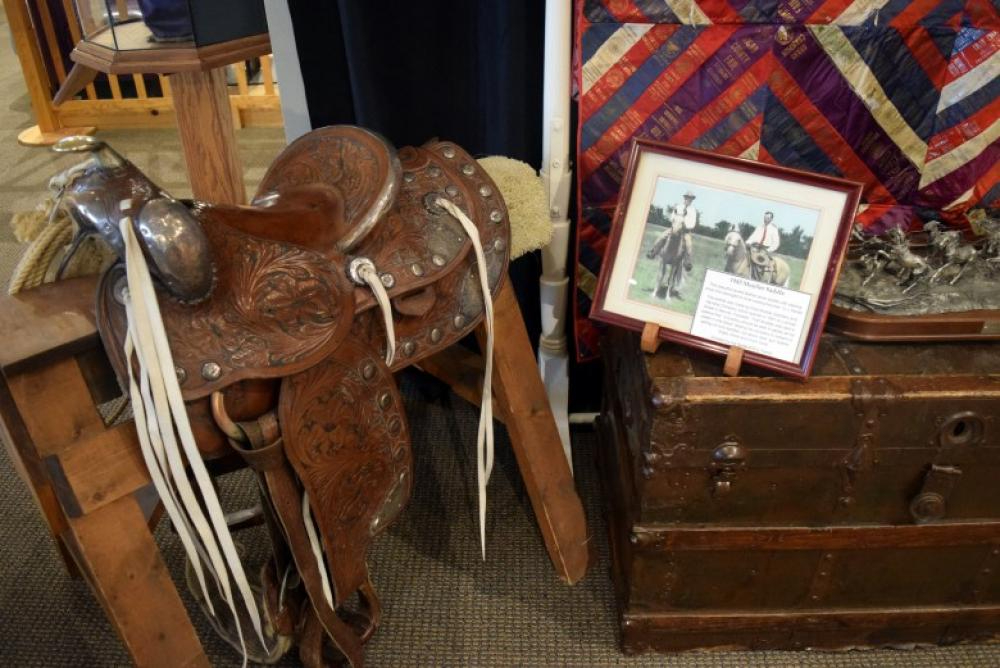 Nearby are four agricultural prints of original paintings done by local artist Nate Laybourn. The museum also proudly displays three large murals painted by this artist, including the immersive Brickel Brothers exhibit, the Farm Logo and the whole wall mural in the lobby of the High Plains Education Center.

Also included in the exhibit is a portrait of Sam Brownell done by Jessie Scott, a nationally recognized local artist who moved to the Haxtun area at age six. The portrait has remained in storage until now because the museum did not have much information about Brownell, but they were recently able to find some information on the Cheyenne Frontier Days historic website.

Brownell competed in Cheyenne Frontier Days rodeos starting in 1904 and in 1917 was the “World Champion Bronc Rider” at Cheyenne. In 1913, he suffered a broken collar bone when he participated in bronco riding; his bronc, Highball, broke through the fence, fell head forward, jumped back onto his legs and continued bucking. During Brownell’s final performance he rode the bronc, Stemler Bay, to a complete halt and even though he did not win that year, his breathtaking performance was remembered for many years.

Art takes on many forms, including home décor and furnishings, and this can be seen in the exhibit with a sculptural rocking chair made from steer horns that was found in the rafters of the barn at the Propst ranch. According to donor Tim Propst, the chair was most likely made by someone in the Propst family in the late 1800s or early 1900s.

Also featured in the exhibit are two paintings by Allen Propst, Bronco to Breakfast and Un-Named Native American Portrait. Propst was the youngest son of Thomas and Emma Propst and was born on the Bar Three Ranch in Merino (then called Buffalo) in 1894. He studied at the Chicago Art Institute and served in World War II in France.

The Bronco to Breakfast painting is similar to the 1908 painting ‘A Bronc to Breakfast’ by famous western artist Charles M. Russell depicting a buckin’ horse and several cowboys. The Propst painting features the faces of the Propst family members as the cowboys.

Additionally, the exhibit features six paintings on wood by Brigitte Shafer that will accompany the museum’s upcoming Summit Springs artifact exhibit. The paintings include her own rendition of Susanna Alderdice (there is no known photograph of her), Chief Tall Bull of the Cheyenne Dog Soldiers, General Carr, an American bison, a tipi and a landscape depicting a horse on the prairie.

Another never-before-seen piece in the exhibit is a “Sioux Hunting Party” hide painting that came from the Pine Ridge Reservation in South Dakota. The donor, Morris Lester, believed it to be an antelope hide.

The exhibit features a couple of quilts as well, including the “Love Apple” quilt, which is always on display, but it’s typically in the background. This quilt was given to Orpha Jame Gillham by her grandmother, Liza Jane Redd, in 1897.

Another example of useable, practical art is a 1943 Mueller Saddle that belonged to local cowboy/rancher O.J. Ferrell. The saddle was made by Fred Mueller Saddlery and Harness Company, which opened in 1891 on Larimer Street, in Denver. 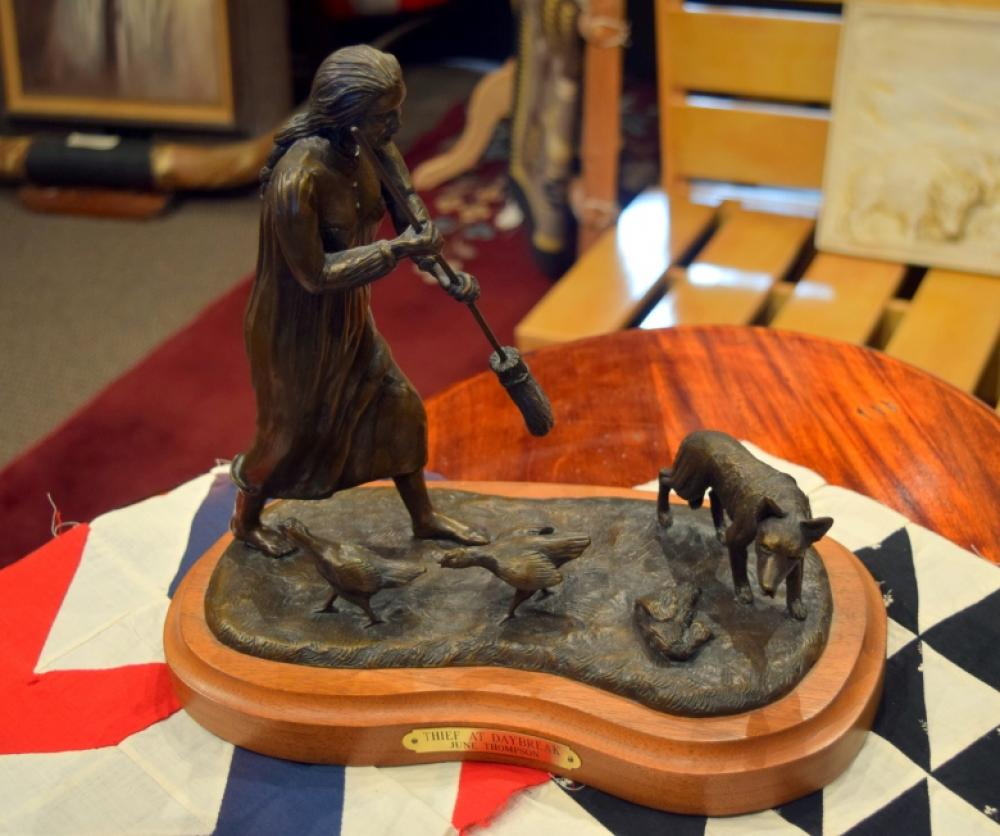 The exhibit also includes a collection of five bronze sculptures that depict pioneer women in “real life” situations that were made by June (Ring) Thompson and were just recently donated to the museum by Ilene Withers, Thompson’s youngest daughter. The sculptures include “Soap Making,” “Thief at Daybreak,” “Thunderbolt of Hope,” “No Time to Panic” and “Make Every Shot Count.”

Thompson’s maternal grandfather, Silas Chase Ring, was Sterling’s first ice cream wagon driver and served as a nursing volunteer during the 1918 Spanish flu pandemic. Thompson was born in 1933 and grew up on a Sandhill cattle ranch near Ashby, Neb., following college she became a teacher and it wasn’t until she was in her 60s that she started sculpting.

Other items in the exhibit include a photo of a curious young Jersey Heifer taken by Dean Hand at the Perry Pomeroy Dairy Farm in Merino, in 1957; a painting by early Sterling resident Sarah Elizabeth Powell Davis, depicting an old pioneer woman sitting next to a clothing dresser staring intently at a pair of shoes; and a Larry Prestwich drawing depicting two cowboys and a dog with a stacked stone home in the background.

Prestwich’s artwork includes subjects of landscapes, still life and figurative compositions. He works in oil, watercolor and printmaking, as well as pen and ink drawings. Several of his paintings can be found around the museum. 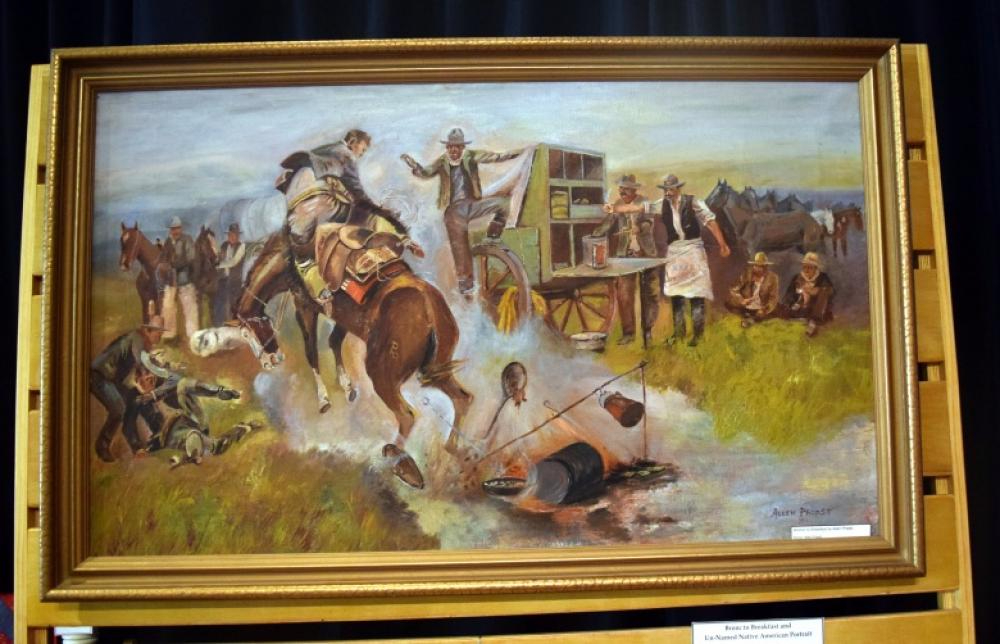 The “Western Art from the Great Plains” exhibit will remain on display through March 31.